What is the HUTAC General Assembly and why does it matter?

Before you delve into the minutes of the 2015 HUTAC General Assembly (GA), we would like to briefly explain what the GA is and why it is important to you as a member of the HUTAC community.

The GA is an annual event that allows HUTAC members to:

Although the 2015 GA is over, we look forward to seeing you at the 2016 GA as well as upcoming HUTAC events!

Thierry Verheije, President of the 2014‐2015 HUTAC Board announced the start of the 2015 General Assembly (GA) and invited all present HUTAC members to participate in the discussions. Thierry first outlined the agenda of the GA, namely:

Although these minutes cover all of the above, it is important to note that they do so under different thematic headings.

Thierry then handed over to Laura Tufis, Marketing Strategist of the 2014‐2015 HUTAC Board, who highlighted the most important new functionalities of the HUTAC official website. The website has been significantly redesigned during the 2014‐2015 Board’s term. Laura presented improvements in the following areas:

Evrim Akar, Treasurer of the 2014‐2015 HUTAC Board, presented the Annual Fiscal Statement of 2014‐2015. The summary of the statement is as follows:

Evrim also presented the HUTAC Balance Sheet as of 31.08.2015, demonstrating that HUTAC reserves amount to a total sum of 39.701,94 EUR. This includes the following:

Evrim also reminded the audience that the expected subsidy of 20,000 EUR, contributed by Nuffic for the 2015‐2016 fiscal year, will be the final installment of funding from Nuffic.

Following Evrim’s presentation, Stojan Simonovski, President of the 2013‐2014 HUTAC Board, sought a clarification regarding the breakdown of HUTAC reserves, more specifically the distinction between the remainder of Nuffic subsidies and funds generated by HUTAC activities. Evrim explained that as per 31 August 2014, the general reserves fund has been split into (1) a reserve that equals the cumulative amount of unspent Nuffic subsidies up until the end of a particular fiscal year, and (2) the equity/total amount of funds raised directly by HUTAC (e.g. through charging membership and event participation fees) during the same time period.

Stojan also noted in a comment that HUTAC is obliged by law to spend all funds provided by Nuffic thus far before 31 December 2017.

Thierry then invited all present HUTAC members to vote on whether, to the best of their knowledge and based on the information presented, the HUTAC 2014‐2015 financial statement is accurate.

Therefore, the 2014‐2015 financial statement was approved.

Thierry Verheije, President of the 2014‐2015 HUTAC Board, invited all present Board members to join him from among the audience in anticipation of the voting procedure that would relieve them of their duties. The 2014‐2015 Board members present were (in alphabetical order):

Iulian Pavel, Event Coordinator of the 2014‐2015 HUTAC Board, was the only Board member not in attendance at the GA.

All HUTAC members in attendance were asked to formally discharge the 2014‐2015 Board. The voting proceeded as follows:

5. Change in HUTAC Advisory Board

Simon Wintels’ resignation from the Advisory Board was announced. Replacing him was former Board member, Thierry Verheije. All HUTAC members in attendance were invited to approve this change:

*The candidate, Thierry Verheije, chose to abstain from this vote.

The membership of Thierry in the Advisory Board 2015‐2017 was officially approved.

The end of term for the 2013-2015 Audit Committee members – Knut Grahlmann, Ruihua (Zack) Lu and Cristina Lucaciu – was announced. Replacing them was former Board member, Robin Jiayuan Li.  All present members were invited to vote.

*The candidate, Robin Jiayuan Li, chose to abstain from this vote.

The membership of Robin in the Audit Committee 2015‐2017 was officially approved.

Thierry Verheije announced the 2015‐2016 HUTAC Board candidates, who were (in alphabetical order):

The 2015‐2016 Board candidates present at the GA, namely Andy, Catalina, Amrita, Laura and Raul, proceeded to introduce themselves, mentioning their backgrounds and Board positions they were running for as well as the contributions they would like to make to the future success of HUTAC.

Andy Golkhandan, candidate for Presidency of the 2015‐2016 Board, introduced the three remaining candidates who were not in attendance, namely Syafri, Joanna and Giuseppe. He explained that these members were unfortunately unable to be present due to business travel, personal reasons and health issues.

Andy then presented the vision of the 2015‐2016 HUTAC Board as well as various growth strategies the new Board plans to explore in the coming fiscal year.

The 2015‐2016 Board theme for HUTAC is Inspire through Innovation. Andy underlined the plans of the new Board to continue the HUTAC tradition of organizing inspirational presentations and workshops, this year with specific focus on innovators and entrepreneurs of all disciplines as speakers and potential sources of inspiration for members. Andy also announced plans for closer engagement of the Board with the current member base and a long‐term focus on steady growth of the community with the help of innovative marketing techniques.

Candidates for the 2015‐2016 HUTAC Board aim to examine, explore and evaluate the following growth strategies:

Raul Leal, the 2015‐2016 Board candidate for the role of Marketing Strategist, emphasized that all these potential courses of action are, at the moment, possibilities to be investigated by the new Board during the course of the year.

Andy Golkhandan, candidate for the Presidency of the 2015‐2016 HUTAC Board, further clarified that the various marketing strategies in question would be investigated during the first quarter (Q1) of the 2015‐2016 fiscal year with implementation and review periods to follow in the coming quarters. The review period starting in the fourth quarter (Q4) is expected to generate a list of recommendations for HUTAC leaders of the 2016‐2017 fiscal year.

Andy then proceeded to present the estimated budget for 2015‐2016, summarized in the pie chart and table below. This budget covers five events in 2015‐2016 including the 2016 HUTAC Annual Conference, and of course, the current event, General Assembly 2015. The general budget portion of 2015‐2016 was confirmed for funding needs of envisioned marketing strategies of the new Board. 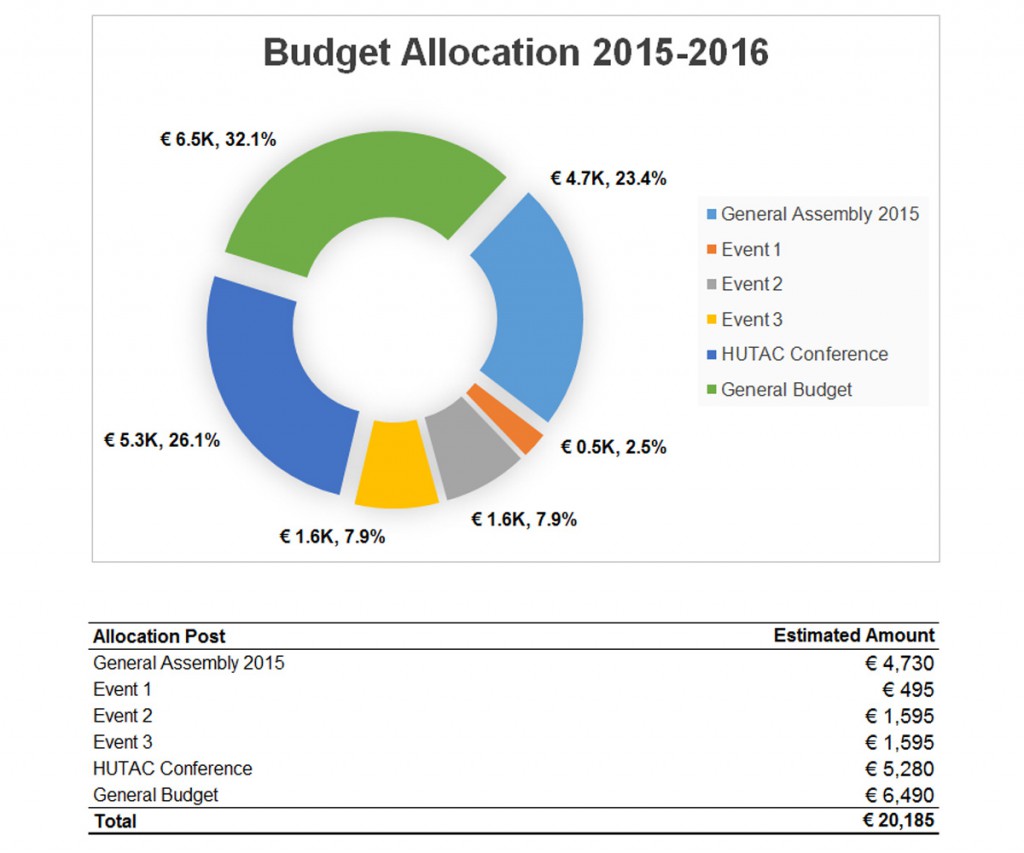 Thierry Verheije, former President and member of the 2014‐2015 Board, explained to the audience that the actual expenditure for the GA 2015 event is expected to be lower than the 4.730,00 EUR estimated by the 2015‐2016 Board candidates. His comment was acknowledged by the potential future Board.

Following the conclusion of the budget overview, Thierry asked all present HUTAC members to consider voting the 2015‐2016 HUTAC Board candidates into office.

*The 5 candidates for the 2015‐2016 HUTAC Board attending the GA chose to abstain from this vote.

Thus, all new Board candidates were approved by the HUTACers in attendance at the GA and officially became the 2015‐2016 HUTAC Board. Read more about your new Board here.

At this point, Laura Tufis, Marketing Strategist of the newly inaugurated 2015‐2016 Board, introduced Akshitara Singh, a non‐member of HUTAC present at the GA who is interested in collaborating with the new Board as an external volunteer throughout the coming year. Akshitara proceeded to speak shortly about herself, her motivations for contributing to HUTAC as well as her professional background as an MBA in Human Resources.

Akshitara’s involvement with the new HUTAC Board was acknowledged by the members in attendance.

There were no further questions and all outstanding business was addressed at the GA. Thus, the HUTAC Annual General Assembly 2015 successfully came to a close at 15:15, 31 October 2015.