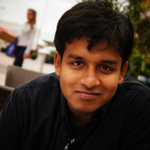 Kollol works as quantitative researcher at a trading firm in Amsterdam. His work focuses on creating effective trading strategies based on market research, mostly pertaining to stock markets. Prior to this, he worked at the Netherlands Forensic Institute in The Hague, specialising in the heart-rate analysis of suspects from CCTV-videos.

Kollol received the Huygens scholarship in 2011 to pursue a two-year master’s degree in Applied Physics at Delft University of Technology – a great opportunity for both his academic and personal life. What he particularly likes about HUTAC is that it brings together people from all over the world and different backgrounds and it motivates them to work towards inspiring goals. As an active HUTAC member, Kollol has built a strong network and benefited from multiple career opportunities.

Kollol has also been actively involved in the Delft branch of AEGEE – the largest trans-national, interdisciplinary student organisation in Europe – where he served as President of the travel committee in 2013-2014.

He is interested in theater and film acting, and has completed a course in film acting at the New York Film Academy, Los Angeles campus, USA. He has also participated in theater plays in the Netherlands. In his free time, Kollol likes to play the guitar. He is an ardent lover of fitness, travelling and learning new languages.