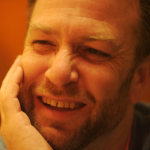 Brian Fitzgerald spent 35 years as an environmental activist with Greenpeace International. Between being arrested for stopping a nuclear weapons test, sailing the ocean to save whales, and helping to establish offices in Italy and the Soviet Union, he pioneered Greenpeace’s use of computers and email in the 80s, the web and mobile technology in the 90s, and social media in the 00s.

From the stages of tech conferences such as SXSW and Le Web, he has made the case for activism and entrepreneurs to explore their common ground, and to pursue inspiring innovations with the power to transform the human journey. In February of 2016 Brian co-founded a startup, Dancing Fox, Ltd dedicated to disruptive ideas for a better world. He’s on Twitter as @brianfit.