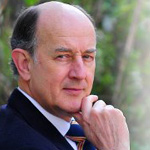 Paul Hohnen has worked intensively since 1975 on a range of global economic development and environmental issues as a diplomat, international civil servant, Director of Greenpeace International and Strategic Director of the Global Reporting Initiative (GRI). Now an independent consultant, his clients include governments, intergovernmental agencies, business and non-profit organisations.

Trained as an international lawyer, Mr. Hohnen worked from 1975 to 1989 as an Australian diplomat at the OECD in Paris, at the EU institutions, and in Fiji and Sri Lanka. He was involved in the 1992 and 2002 Earth Summit processes and participated in the negotiation of wide range environmental conventions, including climate change. He has served on the OECD Expert Panel on CSR and was an expert in the ISO Working Group on Social Responsibility negotiations.

Frequently invited to act as a conference facilitator, Mr. Hohnen has been a keynote speaker at a variety of high-level global business, government and NGO forums. He was featured on the cover of the Dutch magazine ‘Ode’ in 2000 and is a regular contributor to Ethical Corporation and other publications.