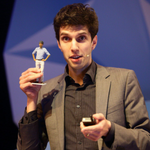 Yori is passionate about providing a safer, more secure world. He is co-founder of Coblue. Coblue has developed products for improving cyber security for large organizations; a crypto currency forensics tool called Cointel, and a non-cloud collaboration solution called Storro. The Kairos Society elected Coblue as one of the 50 most innovative university startups worldwide in 2012, and Coblue and Storro have won numerous innovation awards.

SecondSight elected Yori as Futurist of the Year in 2013. Yori helps organisations and governments with their future orientation, where he mainly focuses on applications of future technologies and implications for business models and society.

The Dutch national magazine Vrij Nederland (Free Netherlands) elected Yori as one of the ‘101 most interesting technologists, inventors and tinkerers’ of the Netherlands (or in other words, according to them, ‘one of the 101 biggest nerds of the country!’) Yori was advisor of former EC vice-president Neelie Kroes at StartupDelta; StartupDelta is now headed by Prince Constantijn van Oranje, for whom Yori will likely stay advisor.

As a Global Shaper of the Amsterdam Hub, Yori is connected to the World Economic Forum.

Yori is a frequent keynote speaker at conferences, and occasionally works as leadership consultant.

He obtained a BSc in Industrial Engineering, Twente University, an MA in Geopolitics, Territory & Security from King’s College London. He studied Exponential Technologies at Singularity University and became Associate of King’s College through Theology & Ethics classes.

HUTAC event: 2016 Annual Conference & General Assembly: Inspire through Innovation | Workshop: A glimpse into the future of our societies