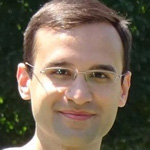 Andy was awarded the Huygens Scholarship in 2011 to pursue his Master’s degree in Aerospace Engineering at TU Delft and has been an active member of HUTAC ever since. The incredible opportunity that the scholarship programme provided him resulted in two years of professionally and personally gratifying study experience in the Dutch higher education system which would not have been possible otherwise.

Originally from Iran, Andy holds a Bachelor’s degree in Aerospace Engineering from Sharif University of Technology. He has also worked during his postgraduate studies at other recognised institutions in his field, namely the University of Toronto Institute for Aerospace Studies and the Autonomous Systems Lab at ETH Zürich. He currently lives in Leiden and is employed as a Senior Software Engineer at Lockheed Martin Commercial Flight Training.

The HUTAC community has played an instrumental role in shaping and fine-tuning Andy’s on-going experience of life in the Netherlands. In addition, the one-of-a-kind international networking and professional career development opportunities courtesy of the HUTAC experience have enabled him to meet inspiring people he otherwise would not have had the chance to meet, visit places and venues he otherwise would not have had the chance to visit, and most importantly, be connected to such a vast network of accomplished young professionals from around the world. As a result, he wishes to give back as a member of the 2015-2017 HUTAC Advisory Board and have the opportunity to directly contribute to HUTAC’s future success.

In his free time, Andy enjoys playing his flute and his soprano saxophone. Designing, building and flying model airplanes has been a passion of his since high school. And he is a big fan of travelling the world.